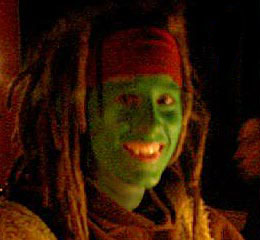 hi my name is jutta bossert, i'm a 29-year-old sound engineer in southern germany, and when i'm bored i sometimes draw stuff.
i've always been good at art classes, and i've always liked comics - so no surprises there. some time ago (about 2002), i started drawing cartoons and putting them on a website. since then, a lot has happened: i moved a couple of times, dropped out of university, started and finished my apprenticeship, and finally found the time and determination to start the webcomic i've been dreaming of for a long time.
i like all kinds of (vegetarian) food, chocolate, books, movies, music and my computer, janus.
i don't like children, beer, powergamers, getting up before noon, stupidity and capital letters.
in case you haven't noticed - i'm not on facebook, myspace or any of those places, and i don't do twitter. why? 'cause.
so i hope you enjoy the comic. if you do (or if you don't) - feel free to write to me, link to my site, use the guestbook, give me money (or chocolate), or whatever.

why did you do it? why? whyyyyyy?

because i can.
i've always wanted to do this webcomic. i was only waiting until my drawing was good enough so i wouldn't die of humiliation after showing it.

why a goblin? where does nicheck come from?

some of you might have met nicheck already - i play her as a LARP (live action role playing) charakter. it's not quite the same goblin, of course. but basically that's where i got the idea.

so are there real people and stories in the comic?

well. some. of course it's inspired by stuff happening to me at cons, but i try to keep actual names and places out of the comic.
so apart from a few ideas and funny situations, it's really all just happening in my head.

why are you so slow in updating?

have you ever tried to draw a comic? it's work. a lot of it. and apart from my full-time job, i have other hobbies, too. at least i've never missed a monthly update. ever.
as of july 2012, there will be no updates. the comic is officially finished.

how do you draw the pages? technically?

at first, there's a (30x40cm)pencil drawing. after that i scan it and put on some layers of color and the lettering in photoshop.
the drawing already takes me a few hours, and coloring even longer cause i suck at using photoshop. which is why i can't update more frequently.

what will happen on the next page?

how should i know? i don't have a script or storyboard or anything, i know sort of where i want the story to go, and the pages just emerge while i'm drawing them. ok, maybe it's a chaotic way of doing it, but i guess that's just the way my brain works...

why is there an english version of a gobo's life?

because most webcomics are english. and i hope more people will read it that way. and because i like the language. at first i wanted to have no german version at all. but its not that much more complicated to do both, so that's what i ended up with.

can you draw something for me...?

what other webcomics do you read?

check out the linx page.

if i'm ever a freelance movie producer or artist, gobopictures will be my label.
on the gobopictures part of the site, i put everything not AGL related, like movies, short comics, pictures or radio plays. but since the content is mostly german, there's no english version. feel free to browse, though.

no problem, just use the guestbook (which is located on the gobopictures main site and in german - but still...!) or email me.